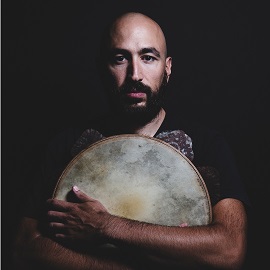 He learned how to play tamburello from the most important older figures and traditional players of this instrument, such as Uccio Aloisi and Pino “Zimba”, even with great masters and innovators such as Pierangelo Colucci, Arnaldo Vacca and Alfio Antico. He developed his own technique and approached a modern way to play and starts many collaborations with musicians from different genres from early music to hip-hop like Ensemble Terra d’Otranto and Dj Gruff (pioneer of Italy’s Hip Hop).

A few years later, he meets Zohar Fresco and starts to study Frame drums from around the mediterranean sea, specifically Darbouka, Riqq and Bendir.

Over the years, he played in many different bands, one of them was the first of italy to play only italian tamburellos named “Tamburello Cafè”. Nowadays he plays in the most important orchestra of traditional music of Salento and Apulia “La notte della Taranta”. He is working also with “Salentrio”, a powerful trio of traditional dance music, and “Les Trois Lézards” a world trance tarantella trio.